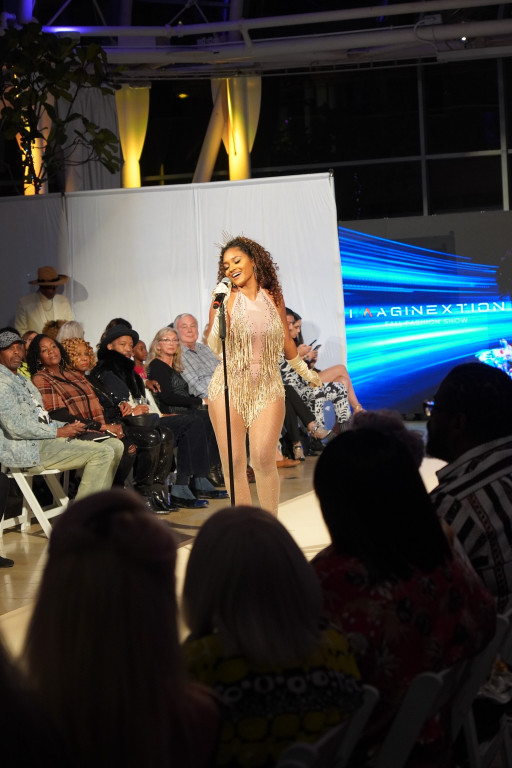 Kaybeerecords is pleased to announce that Trinidad and Tobago model-cum-music artist Karolina Andujar Achong, with the stage name "Lina," made an electrifying debut musical performance yesterday at the midwest fashion show. The midwest fashion show draws attention to local ready-to-wear and haute couture collections and is held at the Arts Garden in Indianapolis. Beautiful and energetic Lina, who looked bedazzling in a peach sequined dress, performed two of her songs, "Stamina" and "Loving Me," from the EP titled My Destiny, so soulfully it sent the audience into a frenzy of delight. The up-and-coming musician is also set to release the Stamina music video come Friday this week.

Lina, also thrilled by her stellar performance at the Midwest Fashion Show, took to her Instagram page (@karolina.achong) to share highlights of the event in her stories. A quick glance at her Instagram page shows a young, talented, and vibrant lady who is determined to get the best out of her music career. Lina's pictures are professional, to say the least, and strike a balance between a playful, fun-to-be-with lady and a young woman dedicated to her goals. She has built an engaged and supportive community of over one hundred and five thousand followers.

Although raised in Trinidad and Tobago, 24-year-old Karolina Andujar Achong was born in Puerto Rico and currently lives in Indianapolis. As early as age 18, Lisa realized that merely dreaming of becoming a professional world-class model wasn't enough. She knew that no one would hand success over to her until she proved herself. So, with her eyes on the prize and against all odds, she strategically leveraged her impeccable networking and social media skills to showcase her talents to the world while working many jobs to support herself through college.

After graduating with honors from the University of the West Indies in May 2020, Lina moved to the U.S., where she landed a deal with Helen Wells Modeling Agency in September of the same year. Lina also worked with Finish Line and Lids Commercial.

Lina is currently focused on her music career and plans to take the industry by storm. Her recent and consistent strides in music are evidence that she has come to thrive. Lina's parents describe her as a kind-hearted, strong, brave, caring, determined, intelligent human being with a burning warrior spirit. She's an inspiration to all young girls out there and a living reminder that anything is possible once you put your mind to it.