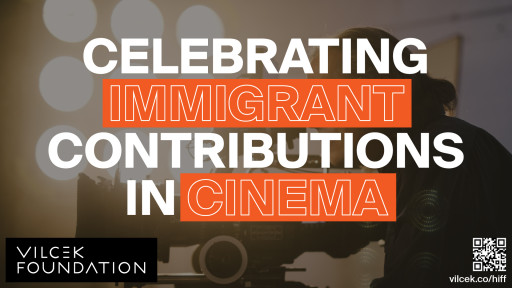 The Vilcek Foundation will present the New American Perspectives program at the 42nd Annual Hawai'i International Film Festival (HIFF) in Honolulu this November. Comprising film screenings, filmmaker discussions and panels, a master class, and classroom presentations by filmmakers, the program centers the contributions of immigrant and foreign-born filmmakers to contemporary cinema in the United States.

"Foreign-born artists have shaped film for more than a century, and have been the leading force behind some of cinema's most indelible works," says Vilcek Foundation President Rick Kinsel. "Since 1980, the Hawai'i International Film Festival has served as an important platform for foreign-born, indigenous, and underrepresented filmmakers. HIFF's mission resonates closely with that of the Vilcek Foundation, and this mission alignment led us to work with HIFF to develop New American Perspectives. We are delighted to present the program at the 42nd Annual Hawai'i International Film Festival, and to celebrate the work of these five outstanding filmmakers."

A highlight of the New American Perspectives program is the New American Perspectives panel discussion, which is free and open to the public. Presented on Saturday, Nov. 12, at the Consolidated Kahala Theatre in Honolulu, Hawai'i, the panel will focus on the filmmakers' craft, and on their individual experiences as foreign-born filmmakers living and working in the United States.

In the coming weeks, the Vilcek Foundation will produce individual profiles on each of the filmmakers and their work on the foundation's website and for the Hawai'i International Film Festival blog.

"With New American Perspectives we honor the contributions of foreign-born artists to the arts, culture, and society in the United States," says Liz Boylan, communications manager for the Vilcek Foundation. "It is particularly meaningful to share this program in Hawai'i, a territory and state that has been profoundly shaped by migration, immigration, and layered cultural histories."

As part of the 2022 program, HIFF will present screenings of the following films, including Q&A sessions with filmmakers and introductions led by the Vilcek Foundation. A full schedule of programs and events for the Hawai'i International Film Festival—including the New American Perspectives program—are available at HIFF.org.

The Vilcek Foundation raises awareness of immigrant contributions in the United States and fosters appreciation for the arts and sciences. The foundation was established in 2000 by Jan and Marica Vilcek, immigrants from the former Czechoslovakia. The mission of the foundation was inspired by the couple's respective careers in biomedical science and art history. Since 2000, the foundation has awarded over $7 million in prizes to foreign-born individuals and has supported organizations with over $5.8 million in grants.

An image of Mexican-born filmmaker Rodrigo Prieto with the text, \"Celebrating Immigrant Contributions in Cinema\" and a hyperlink to vilcek.co\/hiff.

A photo collage of the 2022 New American Perspectives Filmmakers